Hey guys! I bring you a new update with some very requested features!

A nation can now ally one other nation. Not everyone will do this obviously. You can see the allied nation on the map (blue highlight) and on the Nation View. If a nation feels like their ally is blocking them from expanding, they might break their alliance.

You can now command a nation to accept peace with another nation, ally a nation, or break current alliance. Obviously when allying a nation the target can't already be allied. 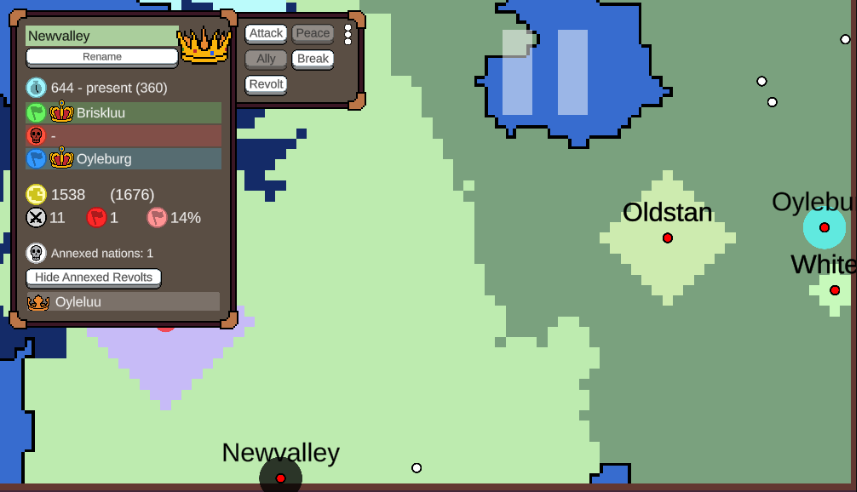 You can adjust how fast the game goes. Running the fastest setting may cause performance drops! 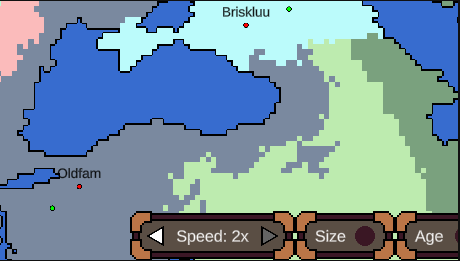 Create a massive Free-For-All across multiple maps with Randomization, Statistics and History tracking

Ran this for 11,000 years on a Europe map the other day all the way to Map Domination and managed to actually start up a horse-racing-esque gambling addiction amongst a group of 15 people in my Discord server. After running it for so long, we collectively decided on some things we wished we had access to since it looks like streams of the map game are going to become a frequent activity for us:

1). Would enjoy a 6th God Power that lets us destroy nations. Had a couple misplaced nations at the very start and no way (that we could find) to get rid of them during setup. Ended up completely redoing the map once to fix a single misclick on starting nations.

2). 2.0x speed was great and ran buttery smooth. It was especially nice in the early game. However, once we'd seen about 6,000 years of conflict, we were craving a 3x and 4x speed badly to help us through the 100-year periods where nobody was doing anything but cleaning up their own revolts.

3). UI-scaling on 1080p+ full-screen gets a bit wonky. Nations with names longer than like 8 characters get cut off in pop-ups, and if both nations have large names, it starts to cut off the text of what happened to them to fit inside the popup. Popups need to have either some kind of size-control, or the text needs to be tool-tippable so that hovering over/clicking it displays the full, unadulterated text of the action and the full names of both nations involved.

4). Would love some options for custom nation name lists. We were hand-naming every revolt to reflect European government revolutions for the first 6k years, but eventually gave up because of how frequently we had to stop to do so. It would be nice to be able to have some control over the name generator in a future version so that we can use our own input list.

5). More statistics! More than anything, we were constantly switching between the various stat menus because we were trying to see who could make it in the Top-10 of the world's history. Size and Age (especially including All-Time) are both great, but we'd love to see a few more stats:
a). Casualties from any particular war a nation participated in. "Armies" are already proxied in some sort of way, so it'd be nice to see who lost the most soldiers in a conflict, especially if I'm interested in a single instance of a war.
b). Lifetime casualties taken across the nation's lifespan especially with - or compared to - lifetime casualties inflicted. Perhaps both raw values and a kill/death ratio. A form of this might be appropriate for a new bar-graph tab.
c). Number of Owned Cities and Cores tracked somewhere on the nation summary card.

6). We noticed that the AI does not handle being attacked very well, no matter their relative sizes to each other. Attackers tend to get this distinct advantage in the form of a growing frontline of troops occupying conquered land, but the defenders never seem to redeploy their troops in any sort of way, so a single breakthrough of the 1-unit thick frontline usually results in a capital blitz and capitulation if you're not a continent-wide mega-nation. This tendency also results in larger nations having 4-5 exclaves behind enemy lines when a peace deal hits because of how advancing armies dance around each other to chase the empty spaces. Don't have a specific suggestion or request for this, but the behavior certainly looks weird and begins to trend towards predictability.

7). More control over national setup beyond specific Capital placement. We wanted to setup pre-placed Cities and Cores that were under the control of a specific Capital at scenario start. It'd be nice to define what level of settlement is being placed and their owner during Setup. If this comes to fruition, circle back to Request 1 so we can also remove/downgrade Cities and Cores too.

8). More detailed tooltips on the government crowns. We figured that fancier crown is better, but the crowns themselves don't have much explanation for the context of what they indicate and what stage a nation is at.

9). Let the Esc key at the Main Menu open a menu that lets you application.quit() if you're running the non-browser deployment.


Really fantastic project. Everybody in my friend group was genuinely hooked on it and people had to actually pry themselves away to go sleep like responsible adults because some of them were like 2-3 hours past when they're supposed to go to bed because they wanted to see what happened. Even outside of just the simulation itself, on a personal use-case, this has great potential to be a tool to simulate RPG worlds and give me some history to construct some worldbuilding around. I'm going to be keeping a really close eye on this project because you have the skeletal structure of a really great project on your hands with this.

The nation menu is partly covered, on the lower part is visible, the rest is to high up.

Thankyou so much for this.

i feel the same.